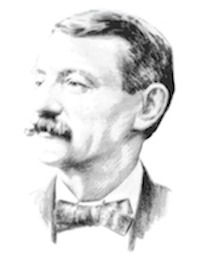 Jake Schaefer, Sr., “A player whose super-brilliance with a billiard cue won for him the sobriquet of “Wizard.” So ran the lead of a 1909 newspaper article singing the praises of Jake Schaefer, Sr. From the last quarter of the 19th century through the first decade of the 20th, Schaefer, Sr. was one of the most feared names in Balkline Billiards.  Derivations of the game were invented just to stymie his genius – all unsuccessfully.  He traveled throughout the world winning matches and gathering fans.  On March 11, 1908, though desperately ill, he successfully defended his title in his final match for the 18.1 championship against Willie Hoppe by a score of 500 to 423.