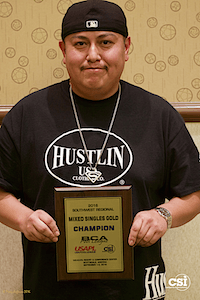 Brian Begay
The Gold Division had 54 players, with Fargo ratings spanning from 519 to 697 and the Silver Division also had 54 players, with Fargo ratings ranging from 367 to 510. The races were handicapped with the lower-rated player receiving game spots based on the difference between the player’s Fargo ratings.
Begay’s path to the finals against Michael Allen of Salt Lake City, Utah, included wins over Tres Kane III, 6-4; Pete Barnes, 6-2; James Main, 6-2; Tim Daniel, 6-4; Ricardo Ritchie, 6-3 and Allen, 6-1.
Allen had a long string of wins before buckling to Begay. He beat Bill Truitt, 5-2; Tenadore Lee, 5-2; Wayne Cagle, 5-4; Bryan Wilson, 5-1; and Navin Talreja, 5-4, before losing to Begay. In the loser’s bracket, Allen beat LeRoy Banks, 5-1, giving him the opportunity to play Begay again in the finals.
Allen jumped out of the gate determined not to let Begay get the best of him, and beat Begay to force a second set in the true double-elimination formant.
But Begay was able to ward Allen off for the second set, beating the Salt Lake City-based Allen by a score of 6-3 in the finals to win the division, earning $1,000 and a plaque. 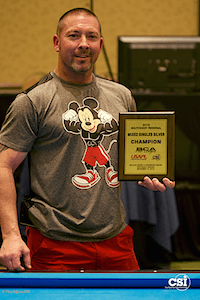 In the Silver division, Joe Avila started his day with a forfeit and then went undefeated to the finals, with wins over Lee Schnieders, 5-0; Mike Sauer, 5-4; Bryson Hunter Sr., 5-4; Anthony Laudadio, 5-4; and Todd Rodgers, 5-2, to take the hot seat.
Adam Payan, who would meet Avila in the finals, beat Guy Martinez Sr., 5-4; John Hardy, 5-0; and Willie Horton, 5-2, before falling to Todd Rodgers. Then Payan moved through the loser’s side of the bracket, with wins over Vince Villalva, 5-1 and Anthony Laudadio, 5-1, before getting revenge against Rodgers, 5-1.
But Payan couldn’t stop Avila’s winning streak and lost in the finals by a score of 5-2. Avila collected $800 for the win.

The 2016 Southwest Regional Tournament is produced by CueSports International, the parent company of the BCAPL and USAPL. CSI also produces independent events, such as the US Open 10-Ball Championship, the US Open 8-Ball Championship and much more. For more information, visit wwww.playcsipool.com or call 702-719-POOL.