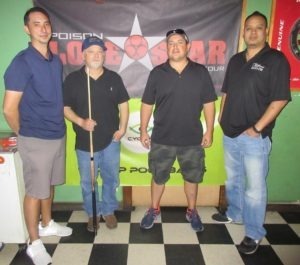 San Antonio, Laredo, Leesville, Lufkin, Orange, and New Iberia, Louisiana, were all well represented at the Poison Lone Star Billiards Tour 9-ball event, held on April 21-22, 2018, at Bogies Billiards and Sports Bar in Houston, Texas. Once again, the Tour would like to thank title sponsor Poison by Predator Cues PoisonBilliards.com, and sponsors Cyclop Pool Balls facebook@CyclopPoolBalls, Ozone Billiards OzoneBilliards.com, APA of North Harris County facebook@APANorthHarrisCounty, OutsvilleBilliards.com, and VaporKnightsUSA.com, for facilitating another successful event that paid out over $5,500 in prize money. Finally, the Tour would like to thank Mike Fabacher and Southern Streaming for providing a free, two-day live stream for at-home viewers, and recording matches for the players.

With an incredible seven wins on the one loss side, Lenz went on to defeat J.C. Torres, 5-0, and Poon, 5-3, to meet Reece in the finals. Lenz accumulated nine straight wins, only to be ousted by Reece in the final match, 5-4.

The Tour would like to congratulate Brooke Dailing of Conroe, Texas, the lone, female competitor in the event who finished 17th-24th in the amateur 9-ball division!

The next tour stop will be open and amateur 9-ball, held on June 9-10, 2018, at Bogies Billiards West, located at 9638 Jones Road in Houston, Texas. For more information, please visit www.LoneStarBilliardsTour.com.