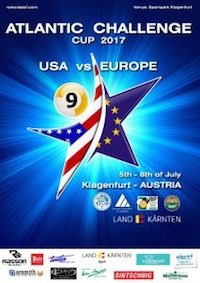 On Tuesday, July 4, at 10:00 in the morning, the Atlantic Challenge Cup started with a press conference. Representatives from the EPBF were joined by the Vice-Mayor of Klagenfurt, Dr. Juergen Pfeiler. The two team captains were also present. US captain, former World Champion Johnny Archer (USA) was joined by April Larson and Shane Wolford. European Captain Albin Ouschan (AUT) sat next to Diana Khodjaeva (BEL) and Patrick Hofmann (GER). The ACC was explained and the present representatives from the largest Austrian print and TV media companies were able to ask their questions and get interviews, pictures, etc.

After a fantastic Austrian lunch, the juniors and their captains were brought to lake Woerthersee where the day was packed with fun and entertainment. The teams challenged each other in stand-up paddling and seemed to really enjoy their day. Then, a boat ride took the teams to the highest European wooden tower on the other side of the lake where everybody was sliding down a long slide. In this „mini-cup“, team USA turned out to be the winner today.

The Atlantic Challenge Cup will begin on Wednesday at 19:30 CET with the first group of three matches. First, the whole teams will compete against each other in a „six versus six“ format. Then, two triples are scheduled. The event continues Thursday with two sessions at 15:00 and 19:30 CET. Friday, also two sessions are scheduled for 14:00 and 19:30. If no decision has been reached by then, Saturday will feature more matches starting 13:00 until one team has won. Each individual match will score a point for the winning team. The team which gets to 11 points first will win the coveted trophy. Last year, team Europe was able to steal it from the USA with a clear 11:4 victory in Chicago over the US players. „We have prepared quite well and thoroughly“, stated Archer, „I am quite convinced that this year the fight for the cup will be much harder“. European captain Ouschan is of the same opinion. „I still think we are ahead of the US team but I expect the fight this year to be definitely tougher than last year“, added Ouschan.

The complete event will be streamed for free on www.kozoom.com. Additionally, all matches will be shown LIVE on the EPBF Facebook page.