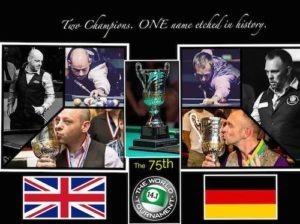 One of these men will have their names etched in history as the 75th World 14.1 Champion in a Race to 300 points.. Watch the FINALS today July 19th at 1:00pm. Livestream  CLICK HERE

(New York City, NY) –  In a re-match of 2013, the two best players this year are UK’s Darren Appleton and Germany’s Thorsten Hohmann. Appleton has gone undefeated once more making it a 20 match winning streak from last year. Hohmann had one loss in the round robin but has stormed back with huge runs over big names at the Andy Cloth 75th World Tournament of 14.1 .

In the first semi-finals, Appleton finally felt some pressure when he was not able to convert any big runs during the match such as he had done against Immonen the night before. Fortunately, Kiamco also struggled. This created a very lengthy match which resulted in a slug fest which saw Appleton succeed by willpower once more in a 200-116 win. 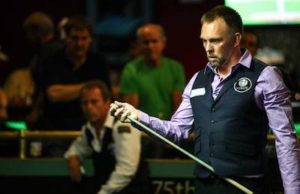 In the next semi-finals, Reiner Wirsbitzki had the daunting task of attempting to unseat fellow German Hohmann in his best game. Hohmann had crushed Orcullo and Strickland by a total of 400 balls to 107, with a 100 plus run in each match. Though Reiner jumped to a slight lead early on, Hohmann wasted no time in another 100 ball run and eventually closed out the match in 3 innings for a 200-80 wallop.

Appleton has now made it to three consecutive finals of the World 14.1, a feat no one has done this millennium and several decades. Hohmann has made this an unprecedented 4th trip to the finals.  No player has won consecutive World 14.1 titles since the early 1980’s by Steve Mizerak. Appleton has the chance to be the first ever non-American repeat champion. And he has not lost a match in the event since the 2013 finals lost to Hohmann. On the other hand, Hohmann has never been beaten in the finals of the World 14.1. One way or another, history will be broken today.

A who’s who of world class players were in attendance at the Andy Cloth 75th World Tournament of 14.1 to etch their name into history’s elite of the father of all pool games. Darren Appleton, Thorsten Hohmann, Stephan Cohen, Shane Van Boening, Johnny Archer, Earl Strickland, Mika Immonen, Tony Robles and many, many more have participated all week. 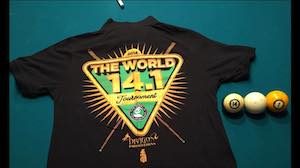 Support straight pool and the 14.1 Hall of Fame by joining the World 141 Club & for a very inexpensive sponsorship, become one of the 141 special people joining the 141 Club which will fund this year’s events. The list of benefits & gifts are huge.

Following is a continuation of the daily series of reports on The WORLD 14.1 TOURNAMENT at STEINWAY BILLIARDS by Phil Capelle:
Day 6 Recap AND Day 7 Preview!

THE FINALS
Thorsten Hohmann vs. Darren Appleton – Stream begins at 1:00
Commentary by Tony Robles and Danny Barouty!!!
This is MUST SEE TV!!!

My Saturday at World 14.1 started with a bad roll as the R train was only making express stops, necessitating a return trip to Steinway Billiards, so I arrived late. But then the rolls changed when I walked in the door and got a ringside seat in the company of fellow 14.1 superfans Bill Maropolus, Dennis Walsh, and Bob Jewett.

Joshua Filler, 17, had been thrilling the crowds with his special genius and rapid style pace of play. But Warren Kiamco, a recent convert to 14.1, largely kept him in his seat, and he finished off the game with a superbly crafted run of 120 and out to win, 200-15! Meanwhile, on a non-streamed table Darren Appleton ended Corey Deuel’s title hopes to advance to the semifinals.

In the second set of quarterfinal matches Earl Strickland, who had put together several long runs in the tournament, seemed like a genuine threat to end Thorsten Hohmann’s quest for a fourth title in this event. But then Strickland lost the lag, broke, and left Hohmann with a dead ball – not good! Hohmann blasted open the rack and ran 141 balls before missing.

After his long rest, Strickland could only pocket 2 balls before getting stuck without a shot. Hohmann then completed his 2 inning masterpiece with a run of 59 and out to win, 200-2! To recap, in the first two games on the TV table, the winners outscored the losers, 400-17! The lesson: Straight pool is the brutalists of pool games when a great player is in top form.

The final quarterfinal game on a non-TV table between Shane Van Boening and Reiner Wirsbitzki lasted for about 4 hours as neither play could put together a long run. Wirsbitzki finally prevailed, 200-169. The 2 semi-final matches would both be played on the TV table.

In the first contest, Darren Appleton ended Warren Kiamco’s bid for the crown, 200-116. At one point Kiamco was only trailing by 14, but after a miss Appleton ran 78 to take a 174-82 lead. Kiamco ran 34, missed again, and Appleton closed out his victory with a run of 26 and out.

The last contest of the day was a civil war (double meaning) between Hohmann and Wirsbitzki, two Germans from the country that has produced far more than its share of 14.1 superstars. Wirsbitzki won the lag and opened with a well-struck long shot, sending a message that he would be a force to contend with. But he could not come up with another shot, and so a safety battle ensued.

After a foul Hohmann ran 56, Wirsbitzki and answered with a run of 56, so after 8 racks he led, 56-55. But then he missed and Hohmann took off on a run of 101 that ended one ball after a round of applause for his century. Hohmann’s miss came on a shot while using inside english. He overcut it, which is a tendency error on these shots for virtually everyone who plays pool. Wirsbitzki replied with a run of 24, missed, and Hohmann ran 43 and out to win, 200-80.

So, today’s final will feature a contest between Hohmann, a three time winner of this event, and Appleton, who won it last year. And to add some considerable spice to the affair, the game will be called by Tony Robles and Danny Barouty, arguably the two best 14.1 commentators of all-time.