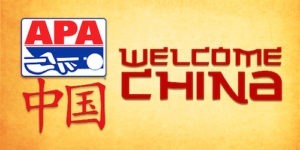 The American Poolplayers Association said, “The World’s Largest Pool League just got even bigger! We’re excited to announce that APA is now in China! This is the third country in APA’s worldwide expansion which also includes Canada and Japan.

“League play officially kicked off in the Summer Session with a performance by internet trick shot sensation and APA spokesperson Florian ‘Venom’ Kohler.

Teams from China are expected to compete for the first time in the  APA National Team Championship in 2016.