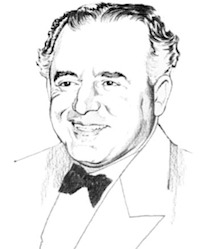 Andrew Ponzi was born Andrew D’Alessandro in Philadelphia.  He acquired the name Ponzi after a witness to his cue prowess compared the likelihood of beating D’Alessandro with beating the infamous “Ponzi Scheme,” an early version of the pyramid game.  A dazzling offensive player, Ponzi competed in the game’s Golden Era, the 1930s and 1940s, against the likes of Mosconi, Crane, Caras, Rudolph and Greenleaf.  Despite that stiff competition, Ponzi captured World 14.1 titles in 1934, 1940 and 1943.