A Waltham, Massachusetts resident, Rudy Graceffa, celebrated his 102nd birthday by playing pool with his friends in an 8-Ball tournament in August.

The Waltham News Tribune reported on the event which was held at a local room, Complete Gamester, in mid August, saying… 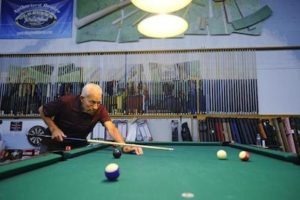 “Graceffa, a long-time pool player, was in attendance to participate in the third annual 8-Ball tournament named after him. The players competing in the Rudy Graceffa 8-Ball Tournament represented four of the top 20 Senior Travel 8-Ball League teams in Massachusetts.

“Graceffa received a lifetime achievement award from his pool-playing pals at the Newton Senior Center. Graceffa received another gift from his billiard buddies: a collage of a dozen Rudy pictures put together and posted on a large poster board by a fellow pool shark, Ed Judice. The poster was signed by all those in attendance at the tournament…

“Graceffa first arrived in Waltham when he was only 7 years old. Later, he worked as a tool maker for 35 years at Raytheon. He gave up the game of golf several years ago, nowadays plays pool every Monday, Wednesday, and Friday at the Newton Senior Center. Then, on every Tuesday, Thursday, and Saturday, he works out at the Waltham YMCA Health Club.”