(Press Release – New York City) “The 2016 nominees for the prestigious Straight Pool Hall of Fame are now announced. The ballot list is built from nominations from past HOF’s, sponsors, and fans.  2016 will mark the 11th consecutive year the World Tournament of 14.1 will be staged… This is the longest consecutive run of the championship ever in its 104 year history with Dragon Promotions  continuing production of the world’s oldest billiards event.This year’s confirmed dates: September 5th-11th,2016. For the fourth straight year, Steinway Billiards in New York City will host the prestigious championship. As usual, a star studded 56 player field is expected for this year’s lineup to win the world’s greatest straight pool championship. 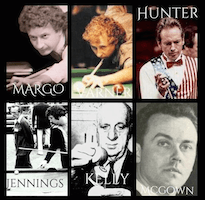 Thank you to the Hall of Famers, sponsor & World 141 Club members for your nominations & votes. On Sunday morning the winning 3 inductees will be announced.