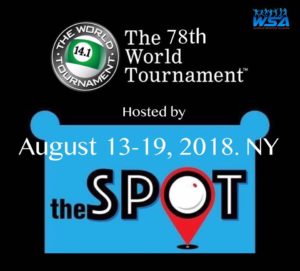 New York City- One era ends, and a new era begins. After 5 years, the World 14.1will be moving to a new venue, the recently opened The Spot Billiards Cafe. On August 13-19th, 2018,  The Spot will have the honor of hosting the longest running and oldest tradition in billiards, the World Tournament of 14.1.  For well over a decade, the World Tournament of 14.1 will be staged which has already set the record as the longest consecutive run of the championship ever in its 106 year history, with Dragon Promotions continuing at the helm. This year’s  78th WorldTournament of 14.1 will be presented by BottleDeck.net . A star studded 48 player round-robin field is expected for this year’s lineup that will be aiming to win the world’s greatest straight pool championship. The World 14.1 is sanctioned by the WSA World Sports Alumni.

“Upon visiting the Spot Billiards my very first time, I knew right away it would be a fantastic venue for the World 14.1. Everything in the room is pristine and well thought out. You can tell the owners took great care in making sure their room would not just satisfy players of all backgrounds, but also that it would be capable of hosting world class events”, said Charlie Williams, Executive Producer of Dragon Promotions and CEO of the WSA World Sports Alumni.

“We love the enthusiasm and hospitality that the Spot Billiard Cafe has given thus far. We feel confident that the players and fans are going to love the new look of the World Tournament”, said Cindy Lee, CEO of Dragon Promotions.

“We are excited and honored to be hosting this prestigious event. The Spot family has been both fan and participants of the sport. We are excited to bring this level of play to our hometown in the Hudson Valley “, said Lenore Donovan-Chen, co-owner of The Spot. She continues, “One of our goals is to help educate and teach the next generation about billiards. We believe that the local pool-player, as well as the adjoining communities, will enjoy the opportunity to witness a world championship event right in their hometown. Our goal as both avid fans and players of the sport is to help teach the next generation about the game and the multiple ways in which it helps to think critically and strategically all while using mathematics and science.”

The Spot has a total of 22 pool tables compiled of 14 regulation and 8 bar tables with a full bar that also serves food. The Spot has hosted numerous regional pro-am tournaments as well as operating their own successful in-house tournaments that have 100% entry pay-outs.
On top of special tournaments, the Spot hosts a variety of league play including team 8 ball, individual 9 ball and 14.1 weekly events.
In additional to offering the best billiard conditions in the local area, the Spot provides guests with multiple forms of entertainment ranging from darts to ping pong to chess and an arcade room. The Spot also has space available for party rentals as well.