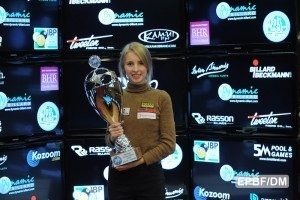 Czuprynska had the better roll of the balls in the final. Leading 3:2, she missed an 8-ball but the cue ball went snookered behind the 9-ball, leaving no shot for her opponent. Polovinchuk tried to hit the 8-ball over one rail and succeeded in doing so but the cue ball scratched in the side pocket. That brought Czuprynska to 4:2. Later on in the match, Czuprynska grew stronger while Polovinchuk obviously seemed to struggle to get going. Whatever the Ukrainian tried, she could not come up with something to put into her account. Trailing 2:5, Polovinchuk tried a kiss shot off the 1-ball and pocket the 9-ball. She did not make it; to the contrary, she left the 9-ball having over the pocket for Czuprynska who accepted the gift and went on the hill with a 6:2 lead. The final rack again was determined by the strong play of Czuprynska who finally pocketed the final 9-ball and won the match and the tournament with 7:2.

„I am so happy“, stated Czuprynska, „this is my first victory in a Women’s Euro-Tour event.“ „I am now looking forward to making it to the World Championships again and maybe finish with a 9th place or better“, added Czuprynska.

The event was hosted by the European Governing Body for Pool, the European Pocket Billiard Federation (EPBF) and organized by International Billiard Promotion (IBP). For further information and reference please go to the federation website womeneurotouronline.com