Ahead of his trip to London to represent Japan at the forthcoming World Cup of Pool, global sensation Naoyuki Oi has insisted he was just being himself in the interviews which gave him worldwide fame earlier this year.

2017 WORLD CUP OF POOL is sponsored by Rasson Billiards who supplies the Official Table; the cloth is supplied by Iwan Simonis and the Official Balls are Super Aramith by Saluc. Predator is the Official Cue and Chalk of the event.

The Japanese No.1 Naoyuki Oi made waves across the globe in February with his hilarious post-match interview at the Dafabet World Pool Masters, which took inspiration from PIKOTARO’s smash Japanese hit song PPAP (Pen Pinapple Apple Pen). Recent estimates conservatively suggest the video had been viewed in excess of 100 million times. 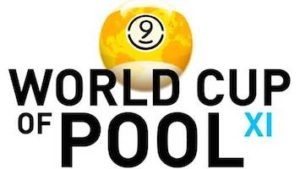 As the world’s best players prepare to travel to York Hall, East London, June 13-18 for one of the sport’s biggest tournaments – the World Cup of Pool – Oi knows his post-match interview is likely to be almost as much anticipated as Japan’s first-round clash with Thailand.

Speaking of his new viral fame, Oi said: “Many reactions come to me from all over the world. Many people liked the interview. I had a variety of reactions – “It’s funny” “Great!” “Foolish!” But it was most important for me that many people were talking about pool.

“I was normal at the interview in Gibraltar. Of course, the reaction in the world surprised me. I’m crazy? I don’t think so. I hope many people know pool well. Pool is a fantastic sport I think.

“This will be the sixth time I have played at the World Cup of Pool. Twice I have finished third as a representative of Japan.

“I want to enjoy playing against world best players. If team Japan reach the final, we must win!”

See Naoyuki Oi live in London during the World Cup of Pool at York Hall, Bethnal Green from, June 13-18. Japan’s first round match sees them take on Thailand at 6:30pm on Wednesday, June 14.

Tickets are on sale now at www.matchroompool.com priced at just £10.00 per evening session (Tuesday to Sunday) and £8.00 per weekend afternoon session. Tuesday to Friday afternoons are free. A season ticket covering all sessions is priced at £60.00.

The World Cup of Pool will carry a $250,000 prize fund including $60,000 for the champions. The event will be produced by Matchroom Sport Television and televised live on Sky Sports as well as other stations around the world. It is then syndicated internationally as 31 x 1 hour programs.

Luke Riches, Matchroom Sport: luke.riches@matchroom.com – Notes: MATCHROOM SPORT is one of the world’s leading producers of televised sport and is responsible for over 1,000 hours of original programming across a range of sports. Based in the UK and chaired by charismatic founder Barry Hearn, they operate three pool events; the Mosconi Cup, the World Cup of Pool and the World Pool Masters. In addition, the company produce a multitude of events in darts, snooker, tenpin, golf, fishing, ping pong, gymnastics, netball, basketball and boxing.