Another great season of NAPL Singles 9-Ball wrapped up this weekend.  After 15 weeks of regular season play, players from the NY-area’s four NAPL singles leagues came together to find out who’s the best in their class and who has what it takes to call themselves the NAPL Singles 9-Ball Grand Champion.

Held at Steinway Billiards May 20th & 21st, players faced off against others in their handicap class in four separate tournament brackets to claim cash prizes and bragging rights for best in class of the NAPL singles league.  These final four winners continued on to battle in championship style in a new double elimination tournament to determine who was THE best overall.  If you missed the free live stream on AZBtv (many thanks, “Upstate Al”!), keep on reading to find out more.  Check it out! 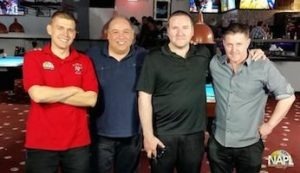 During playoffs each season, players first compete for the title of Champion of their own handicap class before fighting for top prize.  While Julian Tierney (C+) and Matt Marchese (C) dominated by coming through on the win-side of their charts, Mike Flick (B) and Jim Gutierrez (D+) took the harder road – both lost in their hot seat matches on Saturday to Annie Flores (7-2) and Damein Walker (6-4), respectively.  Flick and Gutierrez returned on Sunday determined to defeat the last standing player on the loss-side of their respective brackets (Juan Pellot and Carmine Andujar) in order to play a rematch (times 2!) against the ones who sent them to the loss-side.  Flick beat Flores twice 7-4 in back-to-back sets, while Gutierrez defeated Walker 6-5, 6-4, to gain their titles of best in class.  Congrats to all for top notch performances!

To be crowned NAPL Singles 9-Ball Grand Champion is no small feat.  To even have a chance, one must first rise to the top of his or her division and claim the title of Best in Class, or Champion of their division.  Mike Flick, Julian Tierney, Matt Marchese and Jim Gutierrez did exactly that this weekend.  With this achievement, they then faced off in a new double elimination tournament for top honors.

Congrats to the Winter/Spring 2017 Divisional Winners!

Each of the players listed below deserves a hearty congrats.  They played their best every week, working hard to earn the top spots in their divisions.  Great job!