2016 WORLD 9-BALL ALL SET TO KICK OFF IN QATAR
Expect plenty of drama and excitement as 128 of pool’s best vie for the world title on the 25th anniversary of pool’s biggest event. 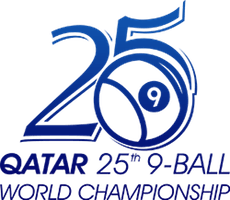 (Doha, Qatar)–The burning hot desert kingdom of Qatar is about to be set ablaze in sporting terms as the 25th edition of the WPA World 9-ball Championship breaks off July 30 at the Al Arabi Sports Club in Doha.

This will be the seventh straight year that the tiny Gulf country, through the government sanctioned Qatar Billiards and Snooker Federation(QBSF),  has put its full backing behind the sport of pool’s biggest and most important event.  Once again 128 players from over 40 countries will clash to see who will be crowned the king of 9-ball pool.

In 24 previous editions dating back to 1990, the World 9-ball Championship has always provided the kind of nerve rattling drama that has captured the imagination of fans around the globe. It’s that kind of pressure cooker atmosphere that has always weeded out the pretenders to pool’s ultimate crown, and produced a veritable pantheon of pool greats.

And then there’s the incredible victories that have been etched into the minds of pool fans for all time; the Philippines Efren Reyes winning in 1999 and setting off a pool revolution in his home country; Taiwan’s Wu Chia Ching, only 16 years old, finding the courage to take 5 straight racks to win a seemingly impossible title(’05); England’s Daryl Peach somehow fending off an entire country in 2007, capturing glory in the Philippines against Filipino Roberto Gomez; England’s Darren Appleton blowing a seemingly insurmountable lead to China’s Li Heiwen, only to find the will to win a pressure packed one rack decider to win his first World 9-ball crown(2012.) 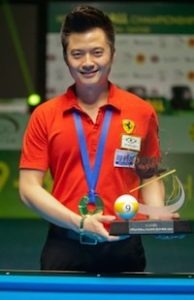 The win was the 26 year old Ko’s second world championship of the year, after capturing the 10-ball world title in the Philippines seven months earlier. The two world titles in one year put Ko onto that list of all time pool greats.

Can Ko repeat in 2016 in Doha? He certainly has the ability and experience. However, only Earl Strickland has won back to back titles(1990 and 1991) so the betting odds on Ko standing in the winner’s circle once again this year are long indeed.

As usual the tournament will be run in two brutally difficult parts. The Group stages will run from July 30 through August 1. The players will be broken up into 16 groups of 8 playing a race-to-9, alternate break, double elimination format.  Four players from each group will make up the final 64, which marks the start of the always tense and dramatic single elimination phase of the tournament.  Matches will then become race to 11, alternate break. The final, which takes place on August 4, will be a race to 13.

One new twist this year that will surely have an impact on the outcome of the tournament is a new rule instituted by the WPA that will see the 9-ball placed on the spot rather than the traditional 1-ball. While the average fan might not fully grasp the significance of this change, hardcore fans and players know exactly what the implications will be.

Clearly this new rule, which is being provisionally tried out by the WPA for 12 months, will favor the better players, and those that can grind out long, tiring matches.

Of course it’s always a crap shoot trying to determine who will reign supreme in a field filled with pool giants and many possible contenders. But as always in pool, the tense and dramatic nature of the format and the event itself generally means that the cream always rises to the top.

It’s been that way for 24 editions of pool’s biggest event. You know it won’t be any different on this, the silver anniversary of the WPA World 9-ball Championship.

The 2016 World 9-ball Championship is being hosted by The Qatar Billiard and Snooker Federation(QBSF), and is sanctioned by the The World Pool Billiard Association, the governing body of the sport of pool.

The WPA will be on hand in Doha throughout this year’s World 9-ball Championship providing up to the minute information, live scoring, photographs and in depth articles with insights and analysis from WPA Press Officer Ted Lerner.