March 3, 2016 (Denver, CO): It was a great day for youth billiards as Jacoby Custom Cues played host to the 2016 Junior 9 Ball State Championship, January 31st in Nekoosa Wisconsin. 36 young players ranging from age of 5 to 18 participated in the festivities. 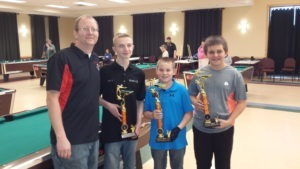 The format was BCA 9 ball for the 10-14 and 15-18 age divisions. The 9 and under division played a game called Spider Ball 7. This is a game where the balls numbered 1 through 6 are placed about 6 inches out of each pocket and the 7 ball is placed on the spot. The players run the table in order just like in 9 ball, and ball in hand rules apply.

After the tournament started to wind down a free Adult/Child Scotch Doubles tournament was offered to anyone who wanted to participate. 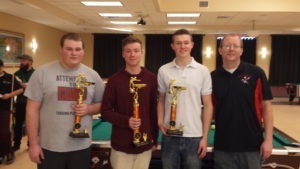 A special thank you goes out to Dave and Brandon Jacoby of Jacoby Custom Cues, Janet of Janet’s Pool Tour, TV Mike, Rob Brumm of Shoot to Thrill Photography, Garret Troop and Jason Mckee of Sneaky Pete Mafia Magazine, Chad Howell of the Quad Cities APA, James Goodnight of Sharky’s Young Guns, and Ben Zeman of the Central Wisconsin APA and World Artistic Pool Player Association. Without ALL of your support the 2016 Junior 9 Ball State Championship would not have been as successful as it was.

About the Billiard Education Foundation (BEF)
The BEF was formed in 1993 as a 501(c)(3) nonprofit charity committed to promoting a lifelong love of pool and building the next generation of players through youth programs and academic scholarships. Visit billiardeducation.org or call (303) 926-1039 to learn more about junior billiard programs in your area.