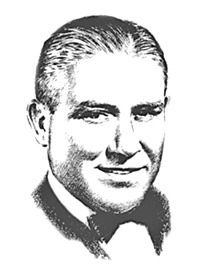 Welker Cochran, a champion who trained for his billiard matches with the same intensity as a professional boxer, won his first of two 18.2 Balkline titles in 1927.  He later went on to become the Three-Cushion champion five times in the 1930s and 40s.  Like many stars of the sport, Cochran learned the game in his father’s billiard establishment, and he became the protigi of Frank Gotch, the wrestler, who sent young Cochran to Chicago to hone his playing talents.