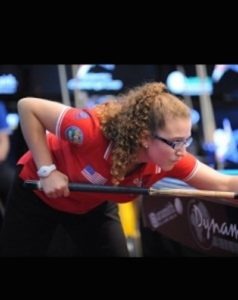 A recent article (published July 24) in Bloomington, Minnesota’s Sun-Current News By Gerg Kleven put a spotlight on the cue sports. Titled “Bloomington Pool Wizard Stars on International Level”, it featured April Larsen “who at the age of 15 has already been successful in the U.S. and internationally.”
Quoting from the article, “The Bloomington Jefferson High School sophomore has been playing pool since the age of 9 and has developed quickly into a standout on the pool table during the past three years of competing against the world’s elite players… ‘One of my biggest thrills was winning the Billiard Education Foundation’s 9-ball national title playing in the 14-and-under age group a couple of years ago,’ said Larson. ‘I love the sport and enjoy traveling around the country and world competing in major tournaments. I learned a lot of valuable tips watching some of the best U.S. and international pool players compete in those various tournaments. And it is fun to meet make new friends along the way.’
“One of Larson’s recent accomplishments came as a participant on the U.S. under-18 junior team in the Atlantic Challenge Cup conducted July 1-4 in Rankweil, Austria. She was named the U.S. squad’s most valuable player after a close 11-9 loss to Europe in the team tournament. ‘We were down 8-3 before coming back and almost beating Europe,’ said Larson. ‘I won both of my singles matches plus one doubles match with my partner Josh Franklin, a 17-year-old from Illinois. It was an incredible experience in Austria. We had record heat while in that country and there was no air conditioning at the site of the pool competition. But our team did pretty well and our players had the chance to enjoy the beautiful scenery of Austria.’

“Larson also competed in the World Junior Championships 18-under girls division during December competition in Shanghai, China… and, “is also competing in the Billiard Congress of America and Billiard Education Foundation national tournaments this summer.

“Competing internationally and traveling the world can be expensive. Some of Larson’s expenses are taken care of by the U.S. national pool program. Fortunately, Larson has lined up a sponsor J. Pechquer, a national pool cue and billiards equipment company. Sponsoring a talented young pool player like Larson could end up to be a rewarding venture for that company as she climbs the ladder of success in that sport.” 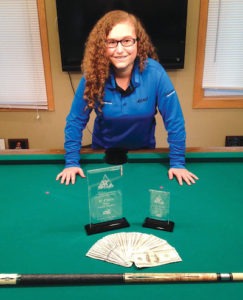