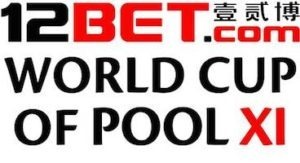 12BET are the title sponsors of the 2017 World Cup of Pool which takes place from Tuesday, June 13 to Sunday, June 18 at the York Hall, London. Featuring 32 two-man teams from around the globe, the 12BET World Cup of Pool is into its 11th year as reigning champions Chinese Taipei attempt to become the first team ever to successfully defend the title.

Broadcast for six days live on Sky Sports in the UK, the tournament will be available live in over 100 countries around the world through the likes of Eleven Sports Network (America), Sport1 (Germany) and CCTV (China). A comprehensive list of countries and networks broadcasting the World Cup of Pool can be found here: http://www.matchroompool.com/world-cup-of-pool/#watchlive

Commented Rory Anderson, Spokesman for 12BET Europe; “We are pleased to be sponsoring the 12BET World Cup of Pool, giving us a perfect opportunity to connect with cue sports fans around the globe.

“The 12BET World Cup of Pool is one of the sport’s biggest events and with Matchroom’s live TV coverage it is now reaching over 100 countries – we are delighted to be involved with the tournament.”

Barry Hearn, Chairman of Matchroom Sport said, “We’re thrilled to have 12BET on board for one of pool’s majors. We have enjoyed a successful relationship with 12BET through World Snooker and are pleased to be able to build on that partnership with the 12BET World Cup of Pool. With the line-up of players and nations announced, this year’s World Cup is set up to be the best yet.”

12BET is a global betting and gaming brand committed to offering its members a first class experience every time they visit the site. 12BET have sponsored several high-profile football teams having done deals with Sevilla FC, Wigan Athletic and Hull City FC.  They have also had associations with Crystal Palace, West Bromwich Albion, Newcastle United and Birmingham City FC. 12BET sponsorships have gone beyond football with 12BET sponsoring the UK Championships and World Open in snooker and the English Badminton Championships.

12BET World Cup of Pool Tickets are on sale now at www.matchroompool.com   priced at just £10.00 per evening session (Tuesday to Sunday) and £8.00 per weekend afternoon session. Tuesday to Friday afternoons are free. A season ticket covering all sessions is priced at £60.00.

The 12BET World Cup of Pool will carry a $250,000 prize fund including $60,000 for the champions. The event will be produced by Matchroom Sport Television and televised live on Sky Sports as well as other stations around the world.

Luke Riches, Matchroom Sport: luke.riches@matchroom.com
Notes: MATCHROOM SPORT is one of the world’s leading producers of televised sport and is responsible for over 1,000 hours of original programming across a range of sports. Based in the UK and chaired by charismatic founder Barry Hearn, they operate three pool events; the Mosconi Cup, the World Cup of Pool and the World Pool Masters. In addition, the company produce a multitude of events in darts, snooker, tenpin, golf, fishing, ping pong, gymnastics, netball, basketball and boxing.