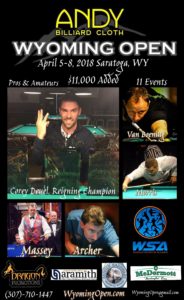 Saratoga, Wyoming-  The 11th AndyClothUSA.com Wyoming Open has now expanded the event into a 4-day billiards extravenganza on April 5-8, 2018.  Also new divisions have been added making the WY Open a now 11 event tournament. The last several years all the divisions filled up, and last year the event was completely full 6 weeks before the event. By far the most popular billiards event in the Rocky Mountain states. They have expanded the field and added more tables to accommodate the popular event that will feature 8-Ball, 9-Ball, 10-Ball, Saratoga, 2 Women’s Divisions, a new Doubles event and the Wyoming State Junior Championships, all disciplines to be mastered at the 4 day Rocky Mountain pool extravaganza. Some of the greatest pool players on Earth returns including  Corey Deuel who became the first player to ever sweep all 3 Pro events. Former winners USA #1 Shane Van Boening, Johnny Archer,  Marc Vidal,  and 7-times Wyoming Champion Rodney Morris will all be returning. Legendary trick shot champion and a runner-up at the WY Open Mike Massey will be back for his 3rd year and past WY Open Champion Charlie Williams will be back as well for his 8th straight year.  It is widely considered to be the most anticipated tournament that players in this part of America looks forward to each year. Event promoter Mayor Ed J. Glode manages to bring players of all levels nationwide to Saratoga. The event is co-promoted by Dragon Promotions and is renown to be the biggest pro/Amateur pool event in the surrounding states drawing over 500 attendees. From beginner, intermediate, expert and pro/open level tournaments will all be available . The Wyoming Open is kicking in $11,000 this year to the entry fees to sweeten the purse with over $30,000 to be paid in cash prizes.

The event is sponsored by widely popular Andy Cloth USA and played on Valley-Dynamo Tables with Aramith Balls in locations all around town.  Local partners include Duke’s Bar & Grill, the Hotel Wolf & Restaurant, and the Riviera Lodge with all events coordinated by Shively Hardware.  Official Pool Cue is McDermott and Official Fine Dining Restaurant is Bella’s Bistro. In addition, the livestream is filmed by www.OnTheRailTV.com for a completely free stream.